History of the American Automobile

Americans love cars. We like to make sure that they are in tip-top shape, and that they are running smoothly on the road and look pretty on the road and while parked. We understand how important our vehicles are to us and that is why we at Addison Auto Body & Glass Inc. offer a variety of quality services in a number of different convenient locations, from auto repair in Elmhurst, IL to towing in Addison IL. Call us at 630-543-7972 if ever you are in need of quick and efficient auto body repairs and/or modifications. 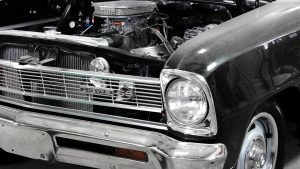 Going back to our love of cars. There is a greater and deeper historical significance to this, thanks to one man who is probably the best candidate to be the representative of the American dream. His name is Henry Ford.

Contrary to popular knowledge, Henry Ford did not invent the four-wheeled vehicle we love today. He invented (or rather, massively upgraded) the concept of the assembly line. He is credited with the business philosophy of “Fordism,” the mass production of cheap goods along with high wages for workers. The automobile traces its roots to late 18th century Europe, particularly France, where early concepts of a steam-powered three-wheeled vehicle were running around in the minds of scientists. Little steps were taken from the late 18th century to late 19th century to continuously improve the design of the automobile.

One story is of Nicolas Cugnot, an engineer, and mechanic in the French military, who was the first noted man to build a steam-powered military tractor and tricycle. The military tractor was known to have been able to pull four tonnes of artillery, and the tricycle was capable of carrying up to four passengers. Seemingly small nowadays, but a huge breakthrough then nonetheless. One day, he was driving with passengers on his tricycle, and unfortunately crashed into a stone wall. He is the first person to have ever been in a vehicular accident. Maybe he could’ve used our service of auto repair in Elmhurst IL.

On the other side of the Atlantic, Americans turned their heads away from electric vehicles to vehicles with internal combustion engines around the 1900s. There are three important names to note here: Duryea, Olds, and Ford.

Brothers Charles and Frank Duryea were America’s first gasoline-powered commercial car manufacturers. They were originally bicycle makers, but took interest in automobiles and gasoline engines and were able to produce the Duryea in 1893 in Massachusetts. The Duryea Model U sold thirteen models but were unable to sustain consumer demand due to its expensive cost.

The first automobile to be mass-produced was the 1901 Curved Dash Oldsmobile by Ransome Eli Olds in Michigan. He began the practice of the assembly line and from 1901 to 1904, his company “Olds Motor Works,” was America’s leading auto manufacturer.

It was not until 1903 that Henry Ford formed the Ford Motor Company that vastly improved the assembly line concept for his famous Model T, later created in 1908. His vision was to make automobiles cheap and affordable to the common American. In 1913, he created the conveyor belt which vastly improved production efficiency. On top of that, workers were given a 5 dollar-day wage and reduced work times from nine to eight hours, which Ford called “one of the finest cost-cutting moves we ever made” because of its positive effect on morale.

His trademark car, the Model T, was said to be assembled in only 93 minutes. By the time the Model T was discontinued in 1927 due to the demand for better designs that offered different features, it was selling at 290 USD and had sold around 15 million units. From then until the present, the automobile has undergone different revisions and improvements that focus on customer choice and convenience. No wonder Americans love cars, it has basically grown with us through tough and easy times.

That’s why here at Addison Auto Body and Glass Inc., we offer no less than top-of-the-line service for your own personal piece of history. Come check out our website at addisonautobody.com for more information, or give us a call at 630-543-7972 for any questions and concerns. We’ve got you covered if you ever need a towing company in Addison IL or auto repair in Elmhurst IL. Addison Auto Body, always!